This refined farmhouse hotel is a 3-minute walk from Charlecote Park and 4.9 miles from the Royal Shakespeare Theatre.

Amenities include a restaurant, a bar/lounge, a tennis court and a playground, plus meeting and event rooms. On-site parking and WiFi are complimentary.

We are an AA awarded 3 star rural hotel retreat, set in Shakespeare's county countryside, with close links to Stratford, Warwick and Leamington Spa.

This rural hotel retreat is formed of attractively converted farm buildings nestled alongside Charlecote Manor and Charlecote Park, where deer roam beside the River Avon.

Leisure facilities at the hotel include a tennis court and children's play area.

Charlecote is an idyllic village with the National Trust Property of Charlecote Manor, with its attached Deer Park, where it is alleged that Shakespeare was caught poaching.

The Charlecote Pheasant Hotel is a beautiful country house hotel set in the delightful village of Charlecote, opposite the village church, historic Charlecote House and Deer Park.

Those wishing to adventure a little further, The Charlecote Pheasant is just minutes from the historic towns of Stratford upon Avon, Warwick and Leamington Spa. The hotel offers charm and character combined with fantastic new facilities.

The Charlecote Pheasant has 70 bedrooms with some beautifully appointed Superior and Premier rooms.

The Charlecote Restaurant with its original solid beams and other features adds to the overall character to offer an informal dining experience.

The hotel Bar and Lounge offers a relaxing retreat to read or enjoy an afternoon tea. The Hotel has 4 acres of landscaped grounds to provide a lovely rural feel. For the more active there is a tennis court.

The Charlecote Pheasant is ideal Hotel for those looking for a relaxing leisure break in Shakespeare's Country.

Book direct on our website to receive one of these perks 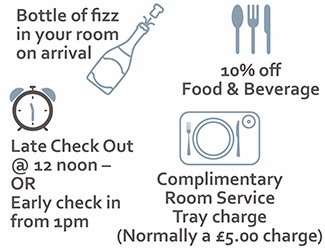 That's a better deal than you'll get anywhere else!